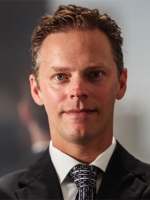 Thomas David Georgianna, III is the Managing Attorney of the Civil Litigation Division and Chapter 11 Bankruptcy Divisions of Boyd Law’s Los Angeles and Orange County Offices.  Mr. Georgianna graduated from Point Loma Nazarene University and received his Juris Doctorate from Brooklyn Law School in 2001 during which time he served as a student law clerk for the Hon. Judge Frederic Block at the United States District Court for the Eastern District of New York.

Mr. Georgianna began his career at 40 Wall Street in New York as counsel for Country-Wide Insurance, a privately held insurance company, where he became an instructor of trial advocacy for new attorneys.  Before relocating to California, Mr. Georgianna had the opportunity to work on a number of notable matters, including litigation spawned by the Enron scandal.

Mr. Georgianna’s corporate practice also includes the intersection of family law and business law.  This area of practice includes the valuation, division and disposition strategies for family owned businesses in the course of a marital dissolution.

Mr. Georgianna was admitted to practice in California in 2006 and is also admitted to the United States Federal District Court for the Central and Southern Districts of California as well as the 9th Circuit Court of Appeals.