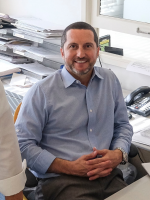 Ryan Clark is an entrepreneur, former collegiate athlete, and likely California’s most prolific business broker and Mergers & Acquisitions Intermediary.  Mr. Clark attended The University of Nevada, Las Vegas (UNLV) where he received his Bachelor of Arts in Finance as well as being elected president of his Sigma Alpha Epsilon fraternal organization.  Always extremely driven and focused, Ryan honed his sales skills while still in high school, and went on to perfect them while in college when he launched of his own firm, a national direct sales company. After achieving substantial success and building a vast personal and business network, Ryan merged his finance and sales background and joined Citigroup as a Senior Financial Planner for high-net worth individuals.  At Citigroup, where he was Series 6 and 63 licensed, Ryan worked in corporate retirement planning, investment management, insurance and estate planning.

In the late 1990’s Ryan relocated from Las Vegas to Southern California to establish the U.S. sales force for a multi-national sales organization. In this role Ryan implemented a business plan he authored and he hired, trained and rolled out his sales strategy to the company’s five locations.  In 2003 he joined his childhood friends to launch The Veld Group.  Within 3 years of heading The Veld Group’s Business Valuation and Business Brokerage divisions, Ryan established himself as one of the nation’s leading business brokers, and later Mergers and Acquisitions Intermediaries, by regularly selling 40 - 50 companies per annum.  Combining his unmatched deal-making talent with a tireless work ethic, Ryan has managed to surpass the ‘done-deal’ transaction benchmarks set by entire brokerage offices.  Since its founding and largely due to Ryan’s contributions The Veld Group and Veld Mergers & Acquisitions has completing over 350 formal and 5,000+ informal business valuations and orchestrated over 1,000 sell-side transactions with an 80%+ success rate versus the 30% industry standard.

Ever so humble for his accomplishments, Ryan attributes his extraordinary business success to his strong support network which includes his wife and children, family and friends, his early entrepreneurial experiences, and to the discipline he developed as a former world-class track athlete (High School State Champion and Division 1 collegiate sprinter in the 100 meter and 200 meter events). This discipline, coupled with the internal balance that he has developed from his daily meditation practice, has propelled him to the top of the brokerage industry where his “grace complements achievement”.